Barracuda – overlooked as an Inshore and Offshore game fish!

Barracuda – overlooked as an Inshore and Offshore game fish! 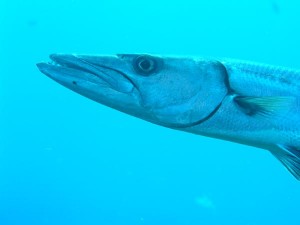 The Barracuda is a salt water fish belonging to the genus Sphyraena in the family Sphyraenidae. It can be found in tropical and subtropical oceans worldwide. It can be described as a ray-finned fish and is known for its large and fearsome appearance. It possesses a long body, fairly compressed and is covered with small, smooth scales. Some of the species can grow to a length of 1.8meters and 30 centimeters in width. This species is a nocturnal creature.

A group of barracudas is termed as a battery. These species is voracious and opportunistic predators which rely on surprise and short bursts of speed in order to overtake their prey. Barracudas are usually solitary when they reach adulthood. However, young and half-grown fish frequently congregate. They prey primarily on fish, even those as large as themselves, and attack by tearing off small chunks.

Barracudas are known to be bold and inquisitive. They may even be dangerous to humans. They have been known to inhabit open waters and bay areas in the shadow and under floating objects. This fish is attracted to things that are silvery in color and have a high reflection similar to the fish they eat. This explains why some of the human attacks made by barracudas are on those wearing earrings, bracelets, or those wearing something shiny.